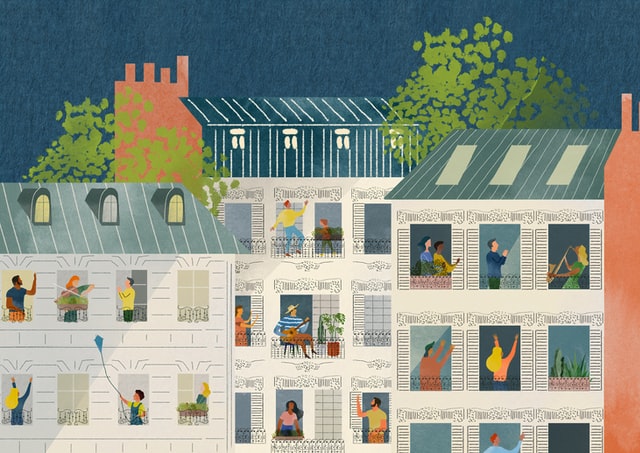 Image created by Catherine Cordasco.
Submitted for United Nations Global Call Out To Creatives - help stop the spread of COVID-19.

The Impact of the Pandemic to Street Life, Urban Culture and Beyond

>>> Webinar feedback
>>> Read the summary of this webinar

Round Table Discussion, moderated by Maurice Harteveld, Delft University of Technology, The Netherlands

Maurice Harteveld has an uninterrupted focus on public space, particularly related to urban design and the architecture of the city. Although, at the current, this focus is shifting slowly to a more intercultural and interdisciplinary understanding of ‘human space’, this work is still adding to the reposition of design theory. Publications following his early work on ‘interior public space’ and ‘interior urbanism’ (since 2005) are awarding and can be seen as recognition. Whereas his current oeuvre, brings urban design back to its fundamental interdisciplinary nature; - in the overlap of cultural anthropology, social geography, and environmental psychology; - and in a non-structural way; bringing city and citizens together. In doing so, he specifically clarifies future challenges for designers, planners and policy makers, and he reframes histories from the questions we have today. He does this within the Delft Design for Values Institute, DIMI, and among others Leiden•Delft•Erasmus alliance. He also works at the Architects Registration Board of The Netherlands and he is a guest professor at various foreign universities.

Angeliki Anagnostou is a registered Architect Engineer in the Technical Chamber of Greece and Urban Designer, graduated from Delft University of Technology. She is currently working as Public Space Designer for the Municipality of Amsterdam. Her diverse educational background and her work experience, both in Greece and the Netherlands has provided herwith a wide range of skills in Architecture, Urban and Landscape Design. She has a strong research orientation, which she likes to combine with design in practice. Her research interests concern mainly the appropriation and the meaning of public space with an emphasis on socio-cultural aspects and locality. People, the users of public space, are her priority and her wish is to make them feel welcome and happy by using public spaces and buildings in their cities.

Architect (1986), MSc UCL (1989). Professor of Architecture and Urban Design in University of Thessaly (UTH). Head of the Department of Architecture UTH 2016-2020. Visiting Professor at London South Bank University (2008), Politecnico di Milano (2004-2016), Universidade Lusofona Lisbon (2006-2016), Visiting Teacher at the AA London (2002). EAAE Council member 2014-2015. As a practicing architect, she has designed and implemented various projects in Greece, she has won prizes in architectural competitions and has participated in exhibitions in Greece and abroad. Her research focuses on design issues in reference to contemporary urban phenomena, mobility and temporary inhabitation, urban landscapes, urban networks and their relation to the designed space.

Edna Peza is a researcher at the Université de Paris, specializing on safe public spaces through bottom-up solutions and design. She has more than 8 years of experience in applied research and consulting with authorities and citizens on public space projects and public policy in several countries.

Vikas Mehta, PhD, is a Professor of Urbanism, the Fruth/Gemini chair and Ohio Eminent Scholar of urban/environmental design at the School of Planning, University of Cincinnati. His work focuses on the role of design and planning in creating a more responsive, equitable, and communicative environment. He is interested in various dimensions of urbanity through the exploration of place as a social and ecological setting and as a sensorial art. Dr. Mehta has authored and edited books, book chapters, and papers on numerous topics including urban design pedagogy, public space, urban streets, neighborhoods, retail, signage and visual identity, public space in the Global south and more. His book, The Street: A Quintessential Social Public Space (Routledge) received the 2014 Book Award from the Environmental Design Research Association. Dr. Mehta holds degrees in architecture, urban design and city planning.

>>> Recorded video of the webinar