The webinar was initiated and hosted by Luisa Bravo (City Space Architecture / The Journal of Public Space, Italy), Hendrik Tieben (The Chinese University of Hong Kong, Hong Kong) and Manfredi Manfredini (The University of Auckland, New Zealand), part of the series “2020: A Year without Public Space under the COVID19 Pandemic”. In this second webinar of the series, artists and scholars from Philadelphia, Berlin, Auckland, and Nan Jing shared creative responses taking place in response to COVID-19 and discussed the role of art and everyday creativity in difficult times like the current crisis.

“This heightened awareness of public space that I think the virus is giving us is creating an opportunity for artists. Artists have fundamentally a desire to help, a desire to make change and a desire to bring people together. So who better to lead the way in healing for all of us than the arts community?”

Jay kicked off pointing out how the awareness of public space in the world is suddenly very acute in COVID-19. Public space is at the intersection of civic, social, and artistic life. Where Jay is based at Kimmel Center for the Performing Art is a great example. Primarily a collection of indoor venues, it also produces pieces in public space, such as the production Cristal Palace (2018) by Transe Express set up a band on a chandelier in the air at the waterfront and thus changed the relationship between performances and public space. IN SITU, an artist network spreading across 12 countries in Europe and beyond, keeps questioning how artists can engage with public space through interventions, as “acupuncture on the city through artistic practice”. The People’s Tower (2017) by Olivier Grossetete reminded citizens how we all are responsible for creating and changing the city via constructing a 10-storey cardboard tower with over 1,000 people and dismantling it again in 24 hours. Tape Riot (2018) by Asphalt Piloten created a new urban landscape on top of an existing one through tape, sound and bodies.
In response to the pandemic, artists, who are experiencing tremendous difficulties with unstable income and lack of health insurance, are still doing an amazing job to bring people together.
Murals with message of washing hands and #VoteByMailPHL campaigns show the civic responsibility artists carry voluntarily. Changing art forms mean orchestra streaming performances, and the birth of projects like Music for Moms from the Kimmel Center - artists composing and sending songs to personal audiences; or Radio Local by Hunt & Darton - an online program providing hyper local information and rethinks how performance connects with us; 100 artists created 100 curated walks in Copenhagen, reframing public space through artists’ representations. And of course, we have all seen photos of rainbows Americans put up at homes. “Artists are our collective memory, our collective consciousness, artists really help us with understanding of what's happening.”

“We had suddenly so much time to do nothing and doing nothing actually helps to be creative. Corona becomes a new subject in our work.”

Yena presented a few extremely interesting projects on behalf of Plastique Fantastique, ‘an art collective which samples performative possibilities of urban environments’. Borrowing public space, finding neglected corners in the city, and involving citizens in the creative process are important notions of the collective. Air and plastic are the common working medium, the thin transparent plastic sheet blurs the line between inside and outside. The collective takes softness as an urban approach so as not to disturb what is already there, it’s playful and creates emotional friction via a temporal alien object and exposing the possibilities in empty spaces.
Responding to COVID-19, Plastique Fantastique leverages experiences with the structure, which has overpressure airflow, an opposite mechanism of air pressure rooms in hospitals. Mobile PPS is a project that explores the possibility of creating air lock protective care units for doctors. iSphere started as a hypothetical story, yet became an informative art performance one day before the regulation of covering nose and mouth on public transport came into effect. Audiences are once again invited to be performers and artists through the tutorial online.

How will the pandemic affect your work in the future?

Yena is now in conversations with festivals to explore the use of bubbles as safe space for future exhibitions. Currently, Plastique Fantastique is also running an exhibition that was remotely set up by the gallery. This exhibition requires reservation but turned out to create a better experience for the audience. Corona will become a future subject of artists for sure.
Jay highlighted that in the middle of a trauma we cannot fully comprehend it. Art organisations are tasked to care for people in new ways, both physically and emotionally. The industry is finding answers to many questions: How to respond to people’s needs and whether it has to take place physically? What ways do the physical trigger our emotional well-being? Forms will change but old mediums like radio and sound still work and we are not limited to virtual space; challenging financial situations will breed opportunity in creativity.

Did you find any source of inspiration from common people's creative responses during the pandemic?

Kimmel Center started #ArtHappensAtHome, documenting how common people are creating meaningful artistic engagement with our families, changing the nature of public space. At the end of the day, art brings people together.

“The (social media) interaction in a (quasi-)public place which is completely locked increases, it indicates the resilience of new place-based social networks.”

With large development and low density being the common form of urbanism in New Zealand, Manfredo looked at how we should rethink the role of public space when there are so many transformative changes taking place, specifically at “distributed participatory creativity and creative destruction of the malled metropolitan centres of Auckland”. Manfredo pointed out how worrying for the sustainable development of cities (New Urban Agenda) is that cities like Auckland have designated as major urban metropolitan centres some areas entirely occupied by shopping malls. His findings confirm the acceleration of the creative destruction of public space led by the shopping mall sector. The analysis of crowdsourced social media data has shown the emergence of an antagonist new type of shopping malls that supplants the traditional ones. This is a ‘post-consumerist’ (S. Miles) mall, where ‘consumption and production are intertwined and often impossible to differentiate’ (G. Ritzer). Data showed visually-based Instagram–a prime relational platform for young (18-39 years old) New Zealanders–increasing its usage during the lockdown. Being a place- and experience-based service, Instagram’s prime nodes have moved away from the public space and, particularly quasi-public space, such malls that were completely shut during the lockdown period. For example, St Lukes–epitome of the traditional consumerist mall–saw a sharp usage decline. Unexpectedly, Sylvia Park–epitome of the post-consumerist mall–saw an increase of interaction. The performance of Sylvia park indicates the resilience of its socio-spatial centrality, its capacity to continue constituting a main reference for its existing social networks notwithstanding its inaccessibility: a place where the distributed participatory creativity “creatively” reshapes the instituted civic system.

“New Zealanders have attempted to connect and communicate namely through written messages, drawing and small installations as it were, that appeared during the lockdown on the fences, windows, and sidewalks around the dwellings in Oakland’s low-density suburban neighborhoods.”

Franco and colleague Kirsten explored the use of public space by ordinary people attempting to communicate with their neighbors during lockdown. With low-density housing and single or two stories homes with gardens, forms of personal expressions and creativity were intended for neighbors walking or cycling past in the vicinity. ‘These can be seen as a laudable effort to establish some kind of connection and communication with what could be a community of people living in the same area’, to establish a sense of community via the use of public space and private space for public view. There are mainly two types of signs: 1) Riddles, jokes, and the popular teddy bear hunt entertaining passers-by, 2) Signs with messages such as ‘Stay Home Save Lives’ and ‘Lest We Forget’ represented by the Anzac Day red poppy.

Andrea Baldini, Nanjing University, Nanjing, China
Expert in art theory and aesthetics with a focus on everyday and urban creativity

“We have to stop thinking about the digital space as separated from the material space.”

Andrea is interested in how creativity shapes and reshapes our daily life, in particular public space, and how digital space and creativity would merge in the future. During the lockdown, Andrea observed multiplied efforts to be creative in ways that usually we are not. A violin session by a professional on a balcony in Milan was recorded by his Chinese neighbor and shared on Weibo, which then became viral and unleashed creativity. People added their own performances by embedding the video, creating an ever-growing artwork, and essentially mixing the digital and the physical. Andrea proposed that the future of cultural production has to be in between the virtual and the material space, exploring the possibilities of having digital production that has a material effect and the other way round. Biancoshock’s and Rolenzo’s SOCOD19 is a project of such, creating a website and having the audience take a selfie and write something, what they have written enter into the code that produces their refrained and modified images that are visible to all. The work is also conceptualized to take a material form at a later stage.

Do you think that after COVID-19 we will still have more online performances? How can audiences re-situate themselves to this kind of new forms of performance? How could we combine virtual reality to bring public space home, and bring people in the video back to the public space?

Manfredo raised the idea of a ‘communication paradox’ regarding the observations in New Zealand: a seemingly opening up of space for interaction, but also exposing aphasia, an impossibility to speak except for a replica of common sense. On the other hand, the high fences actually create a complete disconnect between the two sides of the street, between the public and private space. Thus, COVID-19 opens up a reflective moment of what we do and how we address the audience.
Jay’s prediction is that audiences are going to be more literate about the relationship of technology and public space, what it affords them and what it doesn’t give (things like Zoom). COVID-19 has given us time and space to understand for ourselves what we need, so that after the virus, audiences will head to mediums that provide them with emotional sustenance and abilities to deal with trauma, grief, self-expression, and experience love. Yena thinks that perhaps nothing has changed afterall, except how we will amplify our senses to be able to experience art virtually. Andrea reminded us how essential it is to displace the hierarchy between the center and the periphery, and start cultivating and internationalising the periphery via digital space, and wrapped up with a plea for artists and cultural producers to stop favoring the same cookie-cutter places in order to explore the possibilities of transporting the information and making things locally.

On Plastique Fantastique creative projects during the pandemic:
- ‘A design studio wants to put doctors in air-locked rooms to protect them from the coronavirus while treating patients — here's how it works’ on Business Insider (May 6 2020)
- Plastique Fantastique’s website: https://plastique-fantastique.de/

‘How the COVID-19 Pandemic is Revitalizing Everyday Creativity’ by Andrea Baldini on Sixth Tone (April 20, 2020): 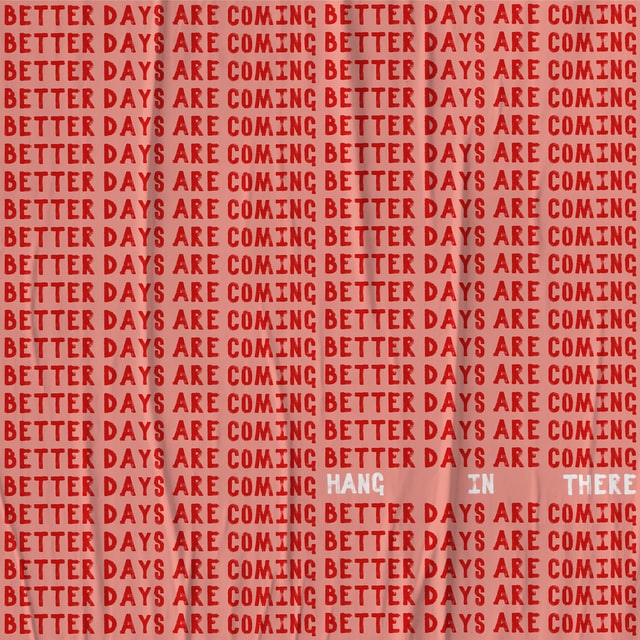 Hang In There. Image created by Ayşegül Altınel.
Submitted for United Nations Global Call Out To Creatives - help stop the spread of COVID-19.