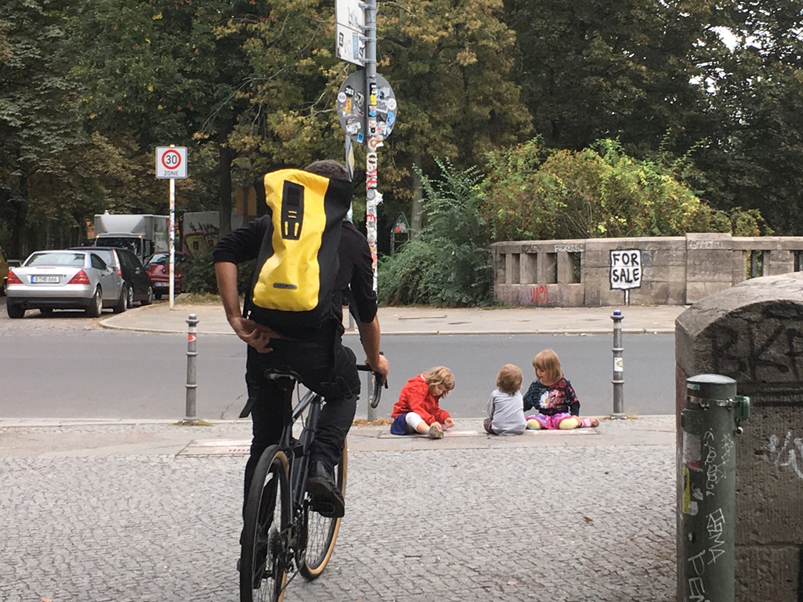 Right to the city for children: from value driven discourse to transformative actions

Robyn Monro-Miller, International Play Association on Right to Play (UN-Convention of the Rights of the Child), United Kingdom

Tim Gill is an independent scholar, advocate and consultant on childhood. He focuses on the changing nature of children’s play and free time, and their evolving relationships with the people and places around them. His work cuts across public policy, education, child care, planning, transport, urban design and playwork. It engages with academics, practitioners, policy makers, the media and the wider public. Tim is a Built Environment Expert for the Design Council, the UK Government’s adviser on design, and a Visiting Research Fellow in the School of Psychology and Clinical Language Sciences at the University of Reading (with effect from March 2020).

Robyn Monro-Miller is a former child with 48 years experience in the world of play. The highlight of her play career being the building of unsafe structures in trees and spying on her neighbours. In her adult life she has resorted to working in the field of school age care to reclaim some of the magic of those early years but has over 30 years experience working across the community in locale. With qualifications in education, children’s services, community management, and training and workplace assessment she is a frequent guest speaker at conferences and seminars across Australia and internationally as well as a spokesperson on children’s issues in the National media. In 2012 Robyn was part of the international delegation to the United Nations in Geneva to progress the development of the UN General Comment on Article 31 “The child’s right to play”. In 2013, Robyn facilitated an International World Café on Article 31 at the official launch in Geneva of the General Comment. Most recently in 2016 she was in Geneva for the International Day of Discussion on children and the natural environment and worked on the IPA project “Under the same sky”. A member of the International Play Association since attending her first IPA conference in Melbourne in 1993, Robyn was formally co-opted to the position of Vice President of the International Play Association in 2012. In taking on the role of President in 2017, Robyn became the first Australian to hold that position in the 56-year history of the International Play Association.

Paul Tranter is an Honorary Associate Professor in geography in the School of Science at University of South Wales in Canberra, Australia. His research focuses on two critical and related issues for modern cities: children’s well-being and the dominance of speed and mobility in urban planning and society. His new book, written with Dr Rodney Tolley – Slow Cities: Conquering our speed addiction for health and sustainability – demonstrates that the child-friendly modes (walking, cycling and public transport) are also the ones that (paradoxically) reduce time pressure for urban residents. Slowing the speed of travel within cities saves time for residents and creates more sustainable, liveable, prosperous, healthy and child-friendly environments. Chapter 1 of Slow Cities is available for download at: https://www.ncbi.nlm.nih.gov/pmc/articles/PMC7325856/

Joshua Lam is an Architectural Designer and Researcher passionate about contingent urban conditions brought forth by people. He works as a Director of the Hong Kong Public Space Initiative, a non-profit organisation based in Hong Kong promoting sociability and livability of the urban environment. Over the last 5 years, he has led a place-making team investigating tactical urbanism intervention with participatory action research, in particular introducing temporary play intervention to various urban typologies and conditions to synergise public life, i.e. Play-making for Place-making research and Take Park in Art series. Joshua holds a Master of Architecture from the Chinese University of Hong Kong and is currently a Member of the Hong Kong Institute of Architects.

Ben Shirtcliff, Ph.D. is an Associate Professor of Landscape Architecture and Urban Design in the College of Design at Iowa State University. Ben’s general area of research is environmental social science: how young people relate to, create, and define public space; and, how public space relates to, shapes, and affords experience. His long-term research focuses on linkages between adolescent behaviour and built environments. Published findings highlight the capacity for youth to appropriate marginal urban space for prosocial gains, cf. “Sk8ting the Sinking City,” “Surfing the YouTube,” “Big Data in the Big Easy,” and “The Transformative Power of City Play.” His innovative approach to access “youth space” from social media has been recognized through multiple funding sources including the National Institute of Environmental Health Sciences and book chapters. Currently, Ben is focusing on health disparities young people face in cities following climate change, decades of transnational migration, and, now, a global pandemic. His research responds to global needs to consider diversity and density in an urbanized society.

Connect with us:
Make a Submission