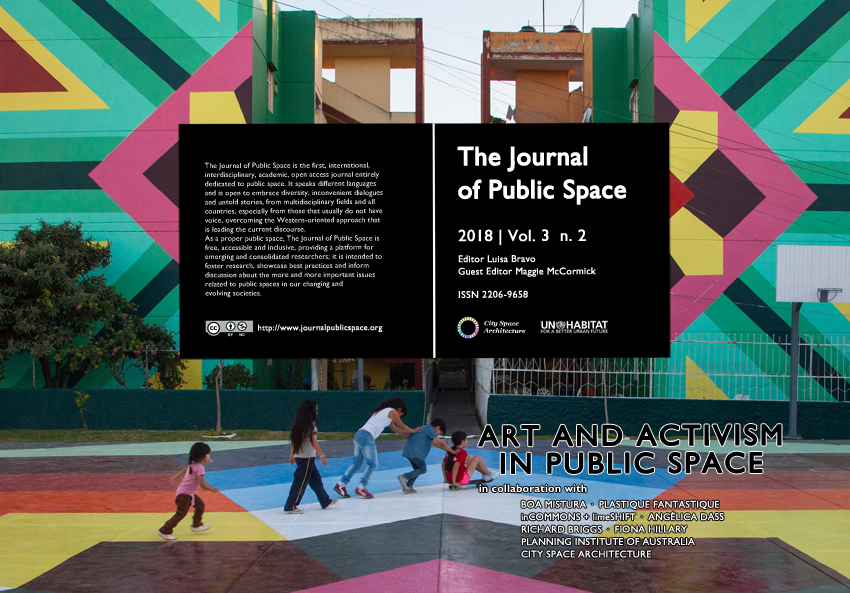 The Authors retain copyright for articles published in The Journal of Public Space, with first publication rights granted to the journal.
Articles in this journal are published under the Creative Commons Attribution NonCommercial Licence (CC-BY-NC) - https://creativecommons.org/licenses/by-nc/4.0/.
You are free to:
• Share - copy and redistribute the material in any medium or format
• Adapt - remix, transform, and build upon the material
Under the following terms:
• Attribution - You must give appropriate credit, provide a link to the license, and indicate if changes were made. You may do so in any reasonable manner, but not in any way that suggests the licensor endorses you or your use.
• NonCommercial — You may not use the material for commercial purposes.

Luisa Bravo is an architectural engineer and an academic scholar, educated in Italy, France and the UK. After completing her PhD, with a thesis on contemporary urbanism, at University of Bologna in Italy (2008), she has been researching, teaching and lecturing in several Universities, in Italy, UK, Spain, Portugal, Cyprus, Lebanon, USA, Hong Kong, Taiwan, Japan and Australia. Visiting scholar at IURD - Institute of Urban and Regional Development, University of California Berkeley (USA, 2012), Visiting Assistant Professor at the School of Architecture and Design, Lebanese American University (Lebanon, 2015), Endeavour Executive Fellow the Queensland University of Technology (Australia, 2018), Luisa is Founding Member and president of City Space Architecture, a non-profit organization based in Italy that performs as multidisciplinary platform for scholars, professionals, artists and citizens engaged in architecture, public space, cities and urbanity. She is Founding Editor, Journal Manager and Editor in chief of ‘The Journal of Public Space’, established by City Space Architecture in collaboration with the Queensland University of Technology and in partnership with UN Habitat, the United Nations Human Settlements Programme.

Most read articles by the same author(s)